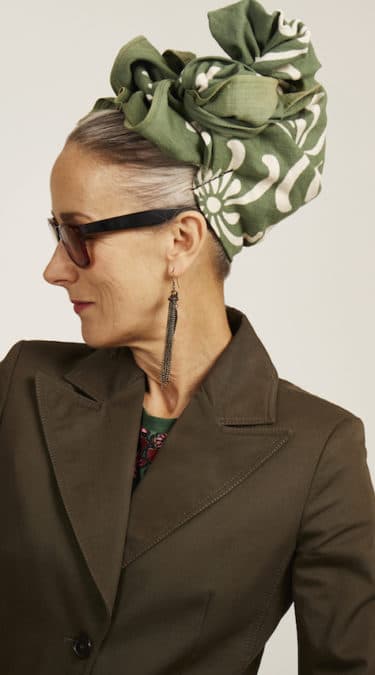 Beginning her career in 1982, Caryn is a former i-D magazine fashion editor and co-editor for 6 years. A BBC Broadcaster for 15 years, she has authored and co-produced numerous fashion programmes and documentaries for BBC 1, Channel 4, ITV, Discovery, Granada and UKTV Style. Including The Clothes Show, Style Challenge, Swank, Style Bible, The Frock and Roll Years, Style Academy and UKTV's New Clothes Show, to name a few.

Caryn has always been interested in the politics of image and self-esteem as well as straight fashion. Her projects have involved refugees in battle zones, garment workers in free-trade-zone slums, mental health experts, MP's and Gov. Ministers, fashion industry’s innovators and ordinary consumers of fashion.

She’s interviewed everyone from Yves Saint Laurent to Georgio Armani and created televised tributes at the V&A for ITV featuring Vivienne Westwood and Philip Treacy amongst others and has written for a host of national publications and produced 4 books.

Caryn has always chosen projects that allow her to use fashion as a vehicle for self-esteem. As personal stylist working with a variety of companies and individuals both on screen and off, and after writing and commenting extensively on body image and body image dissatisfaction, Caryn became an ambassador of the Eating Disorders Association (later to become Beat) and a consultant for inclusive clothing brands.

Education has featured throughout her career. An external assessor, course validator and lecturer in colleges like Central St Martins, London College of Fashion and Royal College of Art, Caryn has an Honorary Doctorate from Kingston University, is an Honorary Fellow at the Arts University College of Bournemouth and held a 10 year post as Visiting Fellow at London College of Fashion. She is also an ambassador for the London College of Fashion's Centre of Sustainability, having proposed this specialist centre during her external assessorship. During her long association with the  UK's premier fashion consumer-show: Clothes Show Live 1989-2016 she became Director of Education, presenting educational opportunities and chairing industry panels for school groups. Involved since its beginning in 1990, she is also Global Ambassador of Graduate Fashion Week.

She has co-chaired award-winning Fashion Targets Breast Cancer, since 1996 which has helped build and maintain Britain's first breast cancer research centre and co founded the award-winning All Walks Beyond the Catwalk in 2009, to promote sustainable body and beauty ideals and emotionally considerate fashion practice. This initiative has changed university curriculums, and reaches internationally – engaging with institutions in Canada and Australia. She helped create the Diversity Network at Edinburgh College of Art and the Body Confidence Awards at Parliament. In March 2013 she collected an MBE for services to Positive Body Image and Diversity in Fashion. Caryn stepped away from All Walks in July 2015.

In recent years, and with an MSc in applied psychology specialising in selfhood, objectification, inclusivity and gender bias, Caryn continues to write, present and teach alongside consulting with corporate leadership initiatives to deliver interactive workshops on the benefits of diverse perspectives and creativity. She has presented internationally in Athens, New York, Toronto, Montreal and Prague and is currently a visiting professor of diverse selfhood at Kingston School of Art.