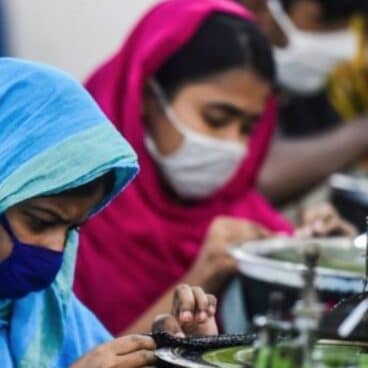 Brands need to know that social media helps us to see right through them. We are all asking, who am I giving my money to and why? We have made Philip Green rich and he has asset stripped his companies, sucked out massive dividends and paid zero tax on them. Did we hear a peep from him over PPE?

COVID 19 for Phillip Green, has been merely an opportunity to suspend contributions to the Arcadia pension scheme. Some large fashion chains cancelled their orders to garment factories leaving low income garment workers to starve. I have two daughters; they and their friends long ago made the choice to shop second hand for a variety of reasons, including the refusal to fund corrupt big companies.

There was a powerful 2015 study looking at American Apparel’s output of sexualised imagery for a particular campaign. The commentary and themes that resulted from women talking to each other on social media about this marketing approach, were dismissive. Descriptions such as ‘sleazy’, ‘objectifying’ and ‘sex trafficking’ illustrated distaste and dislike of the brand narrative. Put simply, it was found that the imagery was at odds with the pro-sustainability and virtue signalling of ‘American-made, from sustainable materials. When the primary message is one of dehumanising women, is it any wonder? Yup, not rocket science. 1

So who are these ill-judged creative contributions coming from? Mass media has become so enamoured with its own power to glamorise anything with the smug PR strapline of creating ‘pretty little lies’ for everyone to buy into. We need new ideas from new identities fast.

Stop casting in your likeness.

Every year McKinsey&Company, file reports confirming the business and profit efficacy of a diverse team. 4 If every business advertised in a broader spectrum of magazines, specifically inviting race and faith diverse, non-binary or differently abled humans into the mix, then there would be an authentic foundation for meritocracy. Trevor Robinson’s agency Quiet Storm has been going since 1995. Here is a CEO who - by nature of his own experience as a person of colour - has naturally recruited for diversity. It’s only white people that ask these questions, and it’s only men that ask why they don’t have enough women on their board.

If we become hyper-vigilant to not promoting our normal as white people, or our centrality as a white middle class identity, then we quickly begin to see the dearth of other identities and this isn’t just about race. We are educating ourselves now about body difference and disability as well as what it means to be cis-gender and how the oppressive heteronormative social model impacts on the lives of the queer community. When we look at the life expectancy of trans women of colour and how much violent assault there is, our ‘normal’ when it is translated into TV, advertising, film of fashion becomes aggressively exclusive, when it could be an inspirational tool for inclusivity.

Our ‘normal’ when it is translated into TV, advertising, film of fashion becomes aggressively exclusive, when it could be an inspirational tool for inclusivity

I began pressuring a commercial organisation I had actually started working for in the late1980s as a result of presenting a prime-time TV fashion show which drew a large audience including many young and teenage viewers. As the live consumer show gained popularity, I saw the potential to create empowering role models for young minds interested in fashion. In the 1990s I began talking to them about expanding the model spectrum away from standard thin women to include curvier models. Later I lobbied for older models in their line-up. It’s not rocket science. I had this conversation with the male CEO year in and year out. The only reason that it finally changed in 2016 was because his position was newly occupied by a female CEO. All those years, he could not, would not, hear what I was telling him about what women wished to see. That’s gender privilege. He designed the world he wished to see.

I've written about the Ben Barry and Simon Bell study (2007)  before and discuss it with students when ever I can: It was a large participant sample, so we’re able to generalise on the findings here. It showed that when audiences looked at imagery, they moved to make a bond with the model who looked most like them. When they were able to make a bond through shared characteristics, they showed an increased intention to purchase by 300%. Diverse identity narratives have a huge role to play in brands’ profits with the much-needed added bonus that it’s good for mental health and wellbeing for us all to see a diverse spectrum of humanity. And, as the world is beginning to understand, it’s not just good for creativity, collaboration, but also empathy and personal growth when we are amongst a diverse spectrum of humanity.