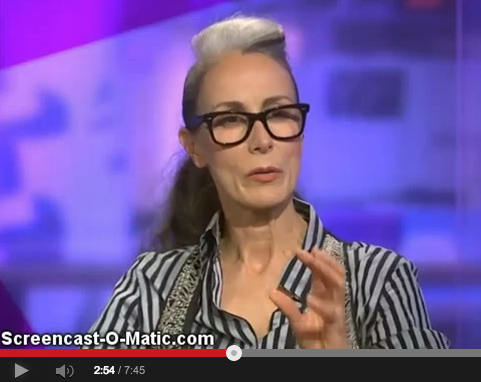 Channel 4 News were on the end of the phone this week - would I  talk about fashion pornographer Terry Richardson?

No one else was up for it and I, after having written the i-D feature on the Pornification of Fashion and the Mail feature on the work of  the above pornographer, was apparently the woman for the job.

I wasn't sure if I would be able to keep calm or whether I might go off the deep end - Richardson has enjoyed favour amongst top creatives like Tom Ford, Anna Wintour and is now photographing politicians and celebrities, all the while being accused by many women of being a manipulative sexual predator. He quickly strips naked on his shoots and encourages young women to believe they would be prudish not to do the same, what inevitably follows is a legal mess to unravel since few women would be able to take claims of molestation to court under these circumstances. My point being that a man who behaves in this way should never be able to access young women so that he can overstep the professional boundary in such an appalling way. Fortunately there was a hysterical man to defend poor persecuted Uncle Terry and he used up all the drama quota.

Feedback from twitter did indeed confirm that I had managed my cool and old matey or as he has become affectionally known 'shouty man from NY,' had lost his.

It was remembering that disgraced publicist Max Clifford had, just this week, received 8 counts of guilty for sexual molestation that took place years previously. He too had branded the survivors as liars and fantasists, when they first took action.